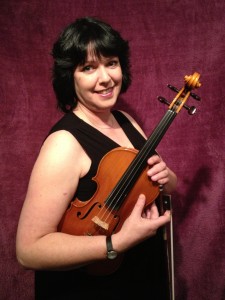 Tina learned to open and close a music stand correctly at the age of 4 before moving on to the recorder and then the piano. Doing the same thing in both hands simultaneously being a problem, she then started the violin aged ten, adding the viola as well a few years later. She won a scholarship to junior department of the Guildhall School of Music and Drama and studied at the Purcell school before attending the Trinity College of Music. Tina now is a busy freelance violinist, leading the London Medical Orchestra and The London Repertoire Orchestra and as well as many choral society concerts and regularly plays with Opera Novella, Swansea City Opera, The Southern Pro Musica and other freelance orchestras. She is a member of the Blackwater String Quartet and is orchestral manager of the Concert Orchestra of London. Tina plays on a violin made in 1987 by Roger Hansell and appears with the kind permission of her cat, Goldie.